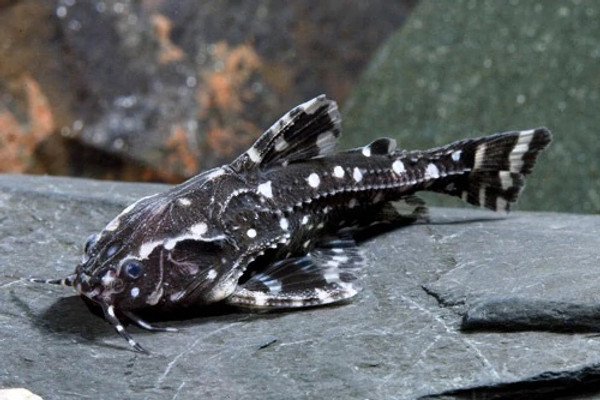 The Spotted Raphael Catfish (Agamyxis pectinifrons) is a medium sized catfish species from the Amazon River basin. It has been a very popular aquarium fish for many years due to its hardiness, generally peaceful nature, and attractive markings. It grows too large for the nano aquarium, but is an excellent candidate for the medium or large aquarium, especially Amazon-type setups with cichlids or tetras. This species is also known as the Spotted Talking Catfish due to its ability to "croak" when removed from the water. It is a doradid (family Doradidae) catfish whose closest relatives are Wood and Banjo catfish families.

The Spotted Raphael Catfish is a somewhat gregarious species, although it is also fine as a single specimen in an aquarium. It is somewhat reclusive and definitely requires ample hiding places in the form of driftwood, pipes, or other crevices. Multiple specimens will sometimes wedge into the same refuge. This fish is not particularly territorial or aggressive, but like most catfish, it will prey on anything small enough to fit in its mouth, such as tiny fish, dwarf shrimp, and fry. It will not bother plants. It is not particularly sensitive, but it prefers fairly calm to moderate water flow. Like many scaleless fish, it will deteriorate from poor water quality and maintenance.

Feeding is very simple for the Spotted Raphael Catfish. In the wild, it mainly feeds on small crustaceans and other invertebrates. In the aquarium, it will accept most live, frozen, and dry meaty foods, although some vegetable matter (such as spirulina-rich dry foods) is recommended as well. It is a voracious eater, so care should be taken not to overfeed. Inserting food near the fish's hiding place is very effective, although it will typically learn to come out of hiding with enthusiasm when food is available.